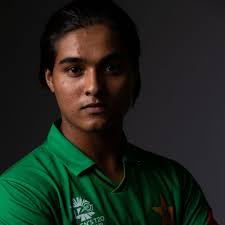 What were you doing when you were 15 years of age? Enjoying life, relaxing out, having fun with friends? Pakistani cricketer Ayesha Naseem is accomplishing all of that, but she is also doing something more. Besides all of that, she is also training for the ICC Women’s World T20 2020.

At the age of 15, she has been called up for the T20 World Cup. Given how seasoned openers Nahida Khan and Ayesha Zafar have failed to produce in previous games, Pakistan Cricket Board have opted to put trust in youngsters. Given the fact she has been picked for the squad at this age, one may believe that she has always been driven to be a cricketer.

That is not the case, though. In fact, she didn’t even knew that a thing called women’s cricket existed, until former skipper Sana Mir came to her city for conducting trials. “I didn’t even know that there’s a proper women cricket team in Pakistan. I had no idea about that. Sana Mir came to Abbottabad to conduct trials for the U16 team and that was the first time I came to know about women’s cricket team,” she said in an interview to Geo TV.

Though she was unaware of women’s cricket, she did compete with the boys of her locality. “I used to play with boys in my hometown and that made me different. I used to face some good fast bowlers there which helped me improve my bat swing and that’s why I am so comfortable playing big shots,” she has stated.

Naseem’s domestic career started at the Departmental T20 Women’s Cricket Championship 2018/19. In that tournament, she plied her trade for PCB Women XI. In the very first match against State Bank of Pakistan Women’s team, she could manage only 2 runs.

However, she did well in the recently concluded National Triangular T20 Women’s Championship 2019/20. She scored 53 runs in the first couple of matches, but her form took a nosedive from then. In the next two games, she could only manage 11 runs.

Naseem is yet to don the Pakistani jersey. However, she is extremely delighted with the chance, and is ready to give her all to make her nation proud. “I don’t have enough words to express how happy I was when I heard my name in the Pakistan team.

I will do what is expected from me and I will do my best according to my ability which is power hitting. My target would be to score maximum runs in power-play overs and provide a good start to my team,” she told Geo TV.

In the 11 domestic T20 games Naseem has played so far, she has scored 159 runs so far. 95 of them were scored in the last season, in which her average was almost 20. She scored 64 runs in this season, at an average of just over 12. She also has a brilliant knock of 52 not out under her belt.

In the 8 domestic limited overs matches she has featured in thus far, she has scored 77 runs. Her highest average in a season was 19, and has a highest score of 38.